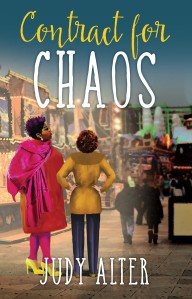 The literary advice, “Kill your darlings,” has been attributed to William Faulkner and probably a hundred others. Almost a cliché today, it is meant to remind authors to catch repetitive use of words such as just, and, but—those empty words that pad the writing but mean nothing or those over-written purple moments that cause readers to roll their eyes.

I’ve always considered the phrase in another light. To me, the darlings are characters. Almost every writer has probably been guilty of being so enamored of one of their characters that they let him or her take over the story when, really, they’re not part of it. But it’s hard to kill off or write out a character you’ve created, and think is a brilliant addition.

In Contract for Chaos, the eighth Kelly O’Connell Mystery I discovered the value of letting your darlings quietly disappear rather than killing them. In the first book, Skeleton in a Dead Space, Joanie is Kelly’s best friend and an important secondary character. Until she confesses to a one-night stand with Kelly’s ex, maybe resulting in her pregnancy, and then marries the detective assigned to investigate the murder of that same ex. Kelly has to grapple with some moral uncertainties.

I tried to work Joanie, the new husband Buck, and the baby girl into the second book, No Neighborhood for Old Women, but they just didn’t fit. They had no part in the story, and I left them out. Kelly marries Officer Mike Shandy, of the Fort Worth Police Department, and guess who’s his boss? Buck. He appears in subsequent books, though not in a major way, and Joanie is far in the background.

In Contract for Chaos, Joanie is thrust into the center Kelly’s friendship. Buck is killed by a sniper, and Mike is appointed interim chief. Kelly stands by Joanie in a practical way (cleaning her house for the horde of officers and their wives who will descend to express their sympathy) and in an emotional way—listening to her grief, crying with her, standing by her at the funeral reception, even tentatively offering her work in her office.

Contract for Chaos primarily deals with the racism that has raised its ugly head in this country and what it can do when it is unleashed in one city. The shooting of Buck Conroy is not racially motivated, as far as Kelly can tell, and Mike agrees. But solving that murder is a big part of the book, so Joanie is again a major figure. It works more smoothly than if I had invented a new character.

So, my suggestion? Kill all those repetitive and over-written words and phrases but be careful about the characters you kill. You may need those darlings again one day.

About Contract for Chaos

When four young men sign the rental contract on a Fairmount house, realtor Kelly O’Connell has no idea she has just signed a contract for chaos. But the racial tensions sweeping the country erupt in Fort Worth, and her tenants fan the flames. A young black policeman shoots an unarmed white teenage thief who charged him, the chief of police is shot by a sniper, and Kelly’s husband, Mike, is appointed interim chief of police. Protests, threats, beatings, and graffiti mark daily life in Kelly’s beloved city. She must protect her infant, reassure her older daughters, and support Mike as he deals with the racism and dissension creeping through the police force and the city. How can she keep her family safe and stop the hate? Will the mayor’s city-wide Celebration of Neighbors calm a city on the edge?

An award-winning author, Judy Alter has written seven previous books in the Kelly O’Connell Mysteries series: Skeleton in a Dead Space, No Neighborhood for Old Women, Trouble in a Big Box, Danger Comes Home, Deception in Strange Places, Desperate for Death, and the novella, The Color of Fear.

Judy’s historical fiction, stories of women of the 19th-century American West, and her mysteries are available in print and ebook on Amazon, B&N and other platforms. Retired after twenty years as director of a small academic press, Judy is single parent of four and grandparent of seven. She lives in Texas, sharing her cozy cottage with her Bordoodle, Sophie.