Back in the day, LAPD was divided into 12 geographical divisions.

The two with the highest crime rate were Newton Street, aka: Shootin’ Newton and 77th Street. As a Metro officer, I spent a lot of time in both and as a new patrol sergeant, I was assigned to 77th.

Remember the hand-drawn single panel puzzles in the back of some magazines? How many items/errors can you find etc.? There would be an upside down three-legged dog in the tree sort of thing. For some reason those always made me think of 77th. So much going on sometimes you didn’t know where to look. Sometimes it was right in front of you.

For a street cop it was like being a kid in a candy store. It was a place where the bizarre and unusual were the norm. 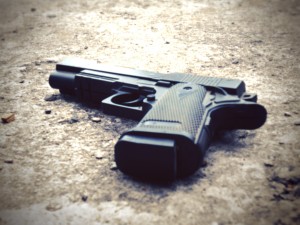 This is in the heart of Watts, an area of extreme violence. There was still some daylight left on arrival and we find a male on the sidewalk, deceased of gunshot wounds. His gun surprisingly was still in his hand. About 8 to 10 feet away was a considerable pool of blood indicating the deceased probably wounded his killer. The blood trail, heavy therefore very visible lead north on the sidewalk.

Leaving one team with the body to await detectives, two officers and I follow the spoor north on foot. One half block later, it turned left/west into an alley.

Several hundred feet more—another blood trail from a north to south alley crossed ours. The blood looks fresh and now we are having a “what the hell is going on moment?” One of the officers with me stated that as we were leaving roll call, someone mentioned a shooting “up there,” pointing north. The officers were still at that scene and the “new” blood was probably theirs. At the next street our trail ended when our shooter entered a car.

Back at the scene, the missing shooter now has a name. A follow up took us to his residence, where his wife said, “Whenever he gets shot he always goes to County General Hospital.”

I cannot verify the following but heard the story several times attributed to the same officer, knowing him I can believe it.

At the 77th, late night and the officer (an old timer) is working the front desk. Into the lobby came a man and woman followed by an older male holding them at gunpoint.

Rather than confront him by drawing his own weapon the officer speaks very quietly. The older man lays the gun on the floor.

Both “captives” are wearing only sheets. The woman nude except for panties, the male, only shaving lotion.

It seems the man with the gun came home at an inopportune moment and discovered his wife and her “friend” in “flagrante delicto.” Rather than shoot them, he had them wrap up in the offending sheets (evidence, don’t you know) and brought them in for the law to deal with.  The officer then had the unenviable task of giving him the bad news.

Just another normal day at 77.

The end, thank you

4 thoughts on “The Call Box: Shootin’ Newton and 77th Street”