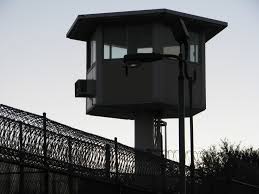 Way back in the 70’s a tragic event took place at California Institute for Men (CIM). A depressed employee went to his assignment on first watch in “A” Tower at the West yard.
Sometime during his shift, he put the barrel of his Ruger Mini-14 rifle under his chin and pulled the trigger. Apparently, he was grief stricken over the loss of his wife. Because towers are fortified with all steel walls, bullet proof glass, and locked from the inside maintenance was called in the wee hours to use a cherry picker to get in, and with local police assistance removed the body.
I guess it wasn’t very pleasant scene inside as one can imagine.
Thereafter, as long as I worked there that tower was the scene of weird events. In fact the administration changed the West towers from alphabetic designations (A, B, C, etc) to numeric leading to Tower “A” becoming Tower 15.
Anyway, over the years odd things happened up there. Inside, patrol sergeants who routinely tour the towers at night would call the tower officer, and ask who the “other” person in the tower was. He would see two dark silhouettes inside the tower instead of one. During shift changes it was routine to check all the ammunition to make sure it was accounted for before relieving the tower officer. Sometimes the 2nd watch relief would find a mini-14 round missing. No one had fired a round, and it was all accounted for, at last—relief. Weird sounds and such continued over the years. It was widely accepted by custody staff anyway that tower “15” aka “A” tower was haunted. In fact, some people refused to work it while others asked for it!
I wonder if it’s still there?

2 thoughts on “View from the Tower: Shadow Guard Returns”