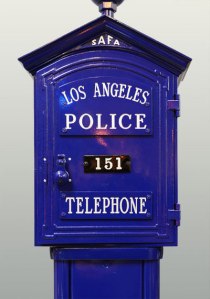 In the mid 1950’s, L.A.P.D. patrol officers carried .38 caliber, 6” barreled revolvers. The choices were either a Colt Officer’s model, or a Smith and Wesson (S&W) K-38. You also had three types of holsters to choose from: a Cross Draw, a Flap, or a Clamshell. A Cross Draw, as name implies, is a butt-forward, high and tight model. Not for me. A Flap, known sarcastically as “the suitcase,” looked like something from either WWI or the Royal Canadian Mounted Police, or maybe the Light Brigade. The Clamshell, however, was an innovative marvel, came metal-lined with leather to custom fit a Colt or a S&W, and it completely encasing the gun that was released as you drew it by the touch of a finger, which then sprung the holster open (hence “Clamshell”).

Incidentally, I knew of one officer handcuffed to a post whose life was saved because the gunman could not figure out how to get his gun from the Clamshell.

Over the years, the Clamshell was unjustly blamed for any number of accidental discharges where the only casualty was the locker door or parking lot. After too many of these incidents, the Department finally said “enough” and did away with the Clamshell. Bids and specs were given and the contract was awarded to a leather shop on Lankershim in Hollywood near the Universal “Black Tower.”

When I entered the shop, the man behind the counter introduced himself as Arvo Ojala, owner, designer and manufacturer of the new holster. It was sleek, well-made, and custom fitted to either the Colt or S&W.  It also featured a spring-loaded safety strap over the hammer.  If I had to give up the Clamshell, this would do nicely. Within a few minutes of my arrival, the conversation turned from the holster to Arvo, himself.

Now, during this time period (probably the early 60’s) TV was dominated by the westerns, which held 8 of the top 10 T.V. spots. The number one spot was owned by “Gunsmoke” wherein Marshall Matt Dillon dispensed 6-gun justice every week. It ran for 20 years, 1955 – 1975. Even now, 42 years after cancellation, it is still on TV as a rerun. Mr. Ojala proclaimed himself to be stuntman, bit player, as well as a leather holster designer and “quick draw artist.” He advised me how he had taught many Western TV stars how to draw and shoot.

In the opening sequence of Gunsmoke, the camera is low and to the right of Marshall Dillon (played by James Arness). The camera shows the gunman that Marshall Dillon is about to confront, and that gunman is Arvo Ojala. We see Dillon draw, hear two almost overlapping shots, however we do not see the outcome. Ojala told me that every time they filmed, and re-filmed that scene, he outdrew Dillon.

One of his holsters can be seen in the opening sequence of the episode “Have Gun Will Travel.” It has a chess knight embossed on it.

Many years later, my fellow scribe Hal Collier had an even more interesting encounter with Mr. O.

Note: the gunfight sequence plus a lot more can be found on Arvo’s website

Read Thonie Hevron’s books: By Force or Fear, Intent to Hold, and With Malice Aforethought are all available through Amazon.

3 thoughts on “The Call Box: “I Outdrew Marshall Matt Dillon””