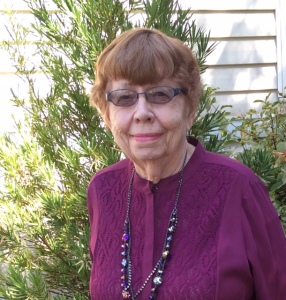 In the beginning, my sister helped me connect with a critique group because I couldn’t locate one where I lived. She read my chapters and reported the problems and suggestions to me. My sister has been a great support to me in many ways.

Through that support group I met an agent. Though he never offered my book to any publishers, he gave me lots of help with my writing.

When I moved to another area, I joined a long established critique group. In that group was a multi-published author named Willma Gore who mentored me for a long time and I owe a lot of my writing ability to her guidance. I’m still in the same group, though the members have changed many times. But the focus has continued on, to help each writer make his or her work even better. Criticism is necessary, because we authors often don’t notice our own flaws. I want to know what’s confusing, what doesn’t work, if I haven’t accomplished what I set out to do. Every mystery I’ve written has been heard by members of this group.

While thinking about critique groups, I must mention that I learned more about writing from the various members than from any class I ever attended or the many writing books I’ve read.

Many years ago, I joined what was called The Police Writers Club which has now evolved into the Public Safety Writers Association and has members from all different law enforcement agencies and other public safety fields, plus a few mystery writers like me. I became friends with many of the members who in turn have helped me in so many ways: answering questions about police procedure and giving me ideas for my mysteries. These men and women have become important to me in many ways.

Like Thonie, I hire an editor to go over my manuscript before I send it off to the publisher. I found the editor through the PSWA group and I chose her for two reasons, one she knows law enforcement, but second, and probably most important, she’s young and will catch anything that sounds like it came from an old lady (me.)

Despite the help of my critique group and my editor, errors still slip by. When the publisher sends back the text block or what is also called a galley, it is important to print it out and go over it carefully for any mistakes or inconsistencies. It’s much easier to find them on a printed page.

And of course, I receive much support from my writer friends too—those busy folks who are willing to let me be a visitor on his or her blog like I’m doing today. We don’t get to see each other often, but when we do at conferences and writers groups and meeting, it 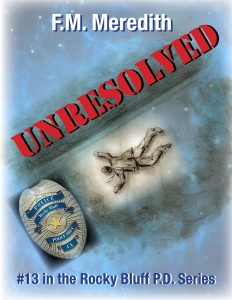 ’s wonderful to talk about the writing life and share ideas with people who understand. Yes, the writing life is solitary, but it’s important to get away and mingle with others, including readers.

This is the last stop in my blog tour. I hope it’s been helpful to writers and intriguing to readers.

Rocky Bluff P.D. is underpaid and understaffed and when two dead bodies turn up, the department is stretched to the limit. The mayor is the first body discovered, the second an older woman whose death is caused in a bizarre manner. Because no one liked the mayor, including his estranged wife and the members of the city council, the suspects are many, but each one has an alibi.

Bio: F. M. Meredith lived for many years in a small beach community much like Rocky Bluff. She has many relatives and friends who are in law enforcement and share their experiences and expertise with her. She taught writing for Writers Digest Schools for 10 years, and was an instructor at the prestigious Maui Writers Retreat, and has taught at many writers’ conferences. Marilyn is a member of three chapters of Sisters in Crime, Mystery Writers of America, and serves on the board of the Public Safety Writers of America. She lives in the foothills of the Sierra. Visit her at http://fictionforyou.com and her blog at http://marilymeredith.blogspot.com/